The graphics for FIBS AND FAIRYTALES? are here: 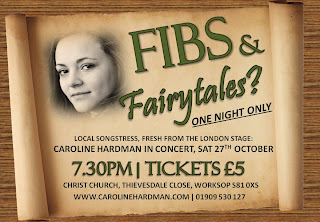 Press release to follow - watch this space!
Posted by Caroline Hardman No comments:

ROYALTY AT THE JUBILEE - What a wonderful day, and such quintessentially British weather...

However, unlike the (undeniably gorgeous) Thames River Pageant, we were indoors in the warmth with music and refreshments, and - most importantly - high spirits.

It was an honour to headline the event on such a momentous occasion, and I am pleased to say that the first video is up!

This was from my music royalty section. My first royal was Eva Cassidy - the Queen of the singer-songwriter tradition.

This is I Know You By Heart; More to follow!
Posted by Caroline Hardman No comments:

Royalty at the Jubilee

Three weeks to go till my jubilee performance,  ROYALTY AT THE JUBILEE, on Sunday July 3rd.

I'll be cracking out those old patriotic favourites - Land of Hope and Glory, Jerusalem and of course our beloved national anthem, God Save the Queen - alongside some more unusual choices, and lesser known songs (when I perform, new writing is never far away...)

It is a great honour to be invited back to perform after the success of FROM WORKSOP TO THE WEST END, and will be a great opportunity to plug my next one-woman show:

Today was the first of a series of open days we will be running at LEDDA (Leanne Elms Drama and Dance Academy) and it was a rip-roaring success!

This was my first real milestone in my role as Head of Singing - obviously I have been Musically Directing LEDDA's upcoming show MUSICAL MADNESS, and nurturing my gorgeous students week by week.

BUT: within the context of the open day I had less that 30 minutes with each age group to inspire a completely new group of students, whose confidence, experience, background and skillset were a completely unknown quantity!

I am pleased to say the day itself was fantastic, and it filled me with pride to see my LEDDA kids rising to the challenge, setting a good example for the visitors and taking them under their wing.

Singing-wise I did a few versions of my own glee-style mash-up (or medley, for us old-fashioned types); increasing the complexity with the age group.

The mash-up was to a piano-ballad arrangement of Firework by Katy Perry, mixed with I Gotta Feeling by the Black-Eyed Peas, mixed with Paparazzi by Lady Gaga


Amazingly everybody, picked it up so quickly, and it was hugely rewarding to see how much they enjoyed putting a new slant on tunes they know and love. Best of all was hearing them singing it as they left to go home. All in all, a highly creative and rewarding day.

God Give Me a Fairytale!

I have just received the next two songs from Cabaret Confidential - the first being the BEAUTIFUL God Give Me Strength by Elvis Costello and Burt Bacharach:

So the first of the footage from Cabaret Confidential has arrived; this is my (personalised, Anglicised, Northernised) rendition of My Simple Request by Joey Contreras.

I was so blessed to share the stage with a host of fantastic performers:

First was the emcee Jamie Anderson, who, despite being horrendously poorly, conducted the night smoothly, warming up the audience and keeping them in stitches, with his warm-hearted (if a little risque) humour and gorgeous voice.

Next was Greek God, the Delectible Diva Constantine Andrews (or Andronikou in the Greek) who managed to convince the audience he'd forgotten his rep folder and borrowed mine! In truth he cracks out a fantastic diva ballad, and sings the socks off most women, so his set was a parody-filled parade of women's songs.

Then came yours truly - the irony being that my professional debut on the London stage was in a new musical theatre writing revue called APRIL REVUE, and I followed Constantine in that show too, with the very song with which I opened my CabCon set! This wasn't at all planned, I didn't know who else was on the lineup when I picked my set, and so I think it's a lovely tribute to just how small the theatre world really is!

After the interval was the lovely Claire Marlowe singing a group of fantastic songs, including Is There A Straight Guy In The House? Claire tells me she considers herself an actress who occasionally sings, which surprised me as she has a cracking voice!

Finally the lovely Sara Cluderay and the Ismena Trio, who have  invited me to guest at their residency at Cafe Koha just around the corner from Leicester Square.

Caroline Hardman
London, United Kingdom
Performer, composer and teacher based in SE London - with a big voice, a buxom figure and a bearded ginger husband!